As I watched North Rona get further away off our stern, I wasn’t really paying attention to Sula Sgeir quickly approaching ahead of us. Sula Sgeir lies 11 miles south-west of North Rona and is far less hospitable than North Rona. It is a narrow rocky island comprised mainly of cliffs and sea caves with no soil and no fresh water source. The island is most famous for its gannet population (roughly 4% of the North Atlantic population) and the men of Ness on Lewis who once a year with permission visit the island in August/September to continue the ancient tradition of the guga (young gannet) harvest. 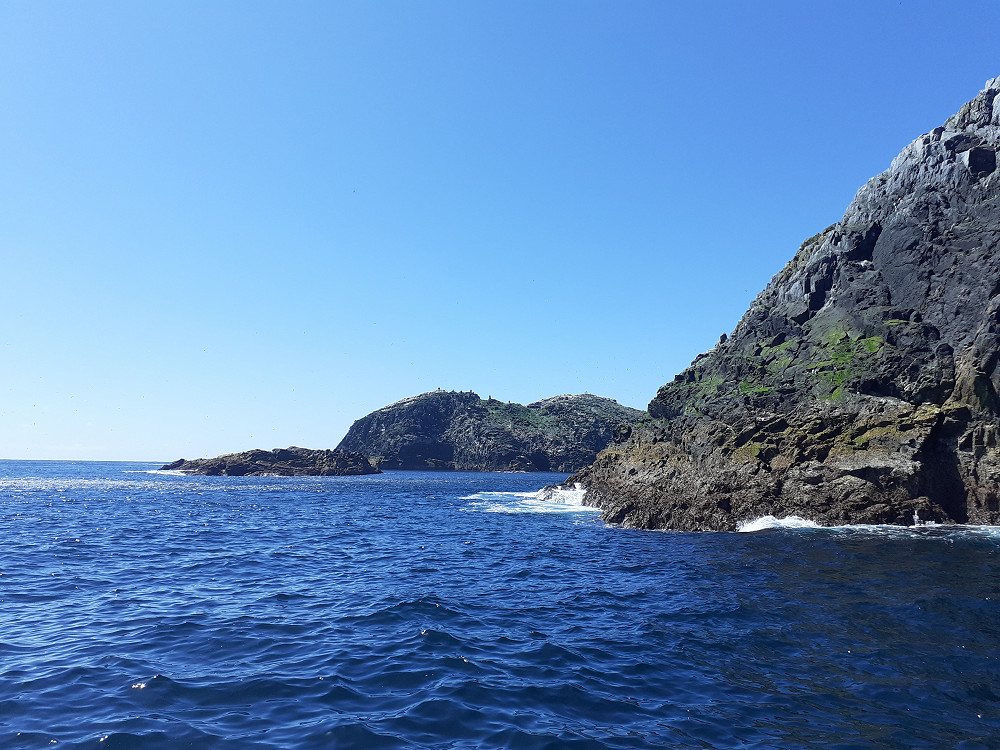 Our priority for visiting Sula Sgeir was to count the cliff nesting seabirds and it was uncertain if landing would be possible given the expected rising sea conditions and the time we needed to return to Harris by that evening. Consequently, I had not really planned to be put ashore. However, as we arrived and the landing looked good the call was made that two boatmen (Iain Angus and Kieran) would take the tender with two others (myself and Roddy from NatureScot) and go ashore whilst the rest of the team stayed on board and circumnavigated the island to do the cliff counts. Within 5 minutes I had grabbed the couple of surveillance stations I had prepared in advance and was ready to go. 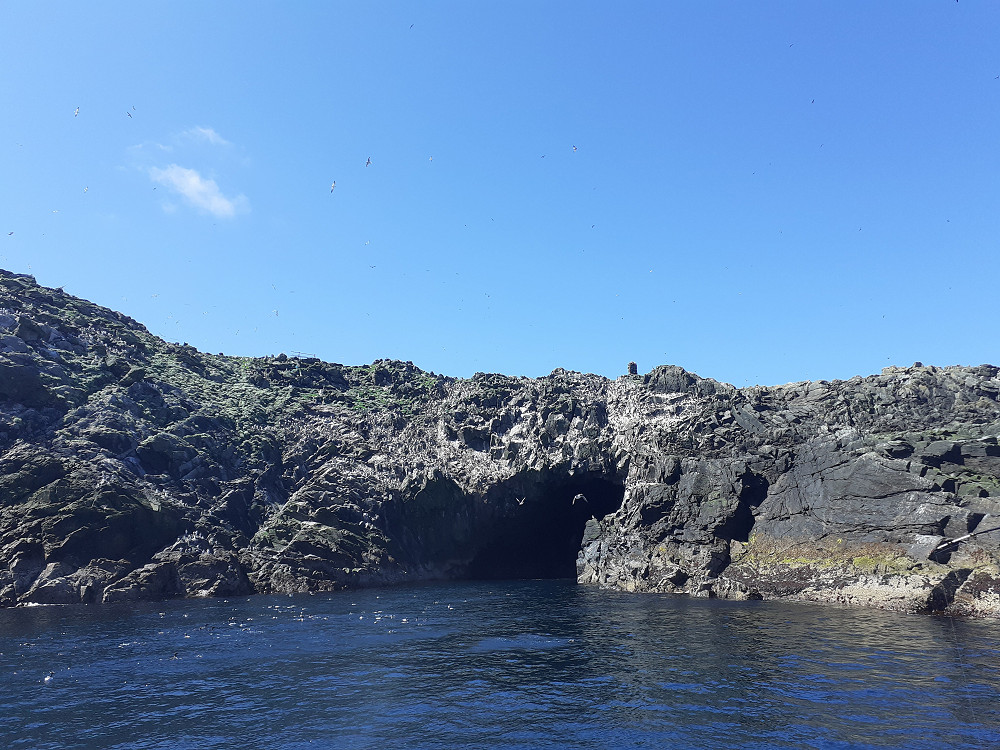 Sula Sgeir landing. We found a nice ledge to step onto to the right of the sea cave Photo Tom Churchyard

We were lucky that the landing on Sula Sgeir was considerably easier than it had been for North Rona. The bay was well protected from the swell and it was relatively simple to find a rock ledge to time stepping onto as the boat rose. A short scramble up some nice solid and secure rock got us quickly up to the top of the island. When we got there, I was astonished!

Despite having read quite a bit about Sula Sgeir I had clearly missed something. I knew there would be a dense gannet colony over parts of the island, I knew that the cliffs held good numbers of auks and was not surprised to see puffins wandering in and out of the guga hunter bothies. What I had not been prepared for was the number and density of fulmar nesting everywhere. I usually associate fulmar as nesting in the grassy areas and ledges at or near cliff tops where they can quickly launch themselves into the air. Here I was confronted with a carpet of fulmar, all evenly spaced apart. It was a configuration I had only ever witnessed on tropical and sub-tropical islands where seabirds nest on low lying islands with no cliffs. It was just stunning. So many of the photos of Sula Sgeir that you see are about the guga hunt when fulmar, and the cliff nesting birds have departed you just don’t realise how densely filled it is with birds during June! 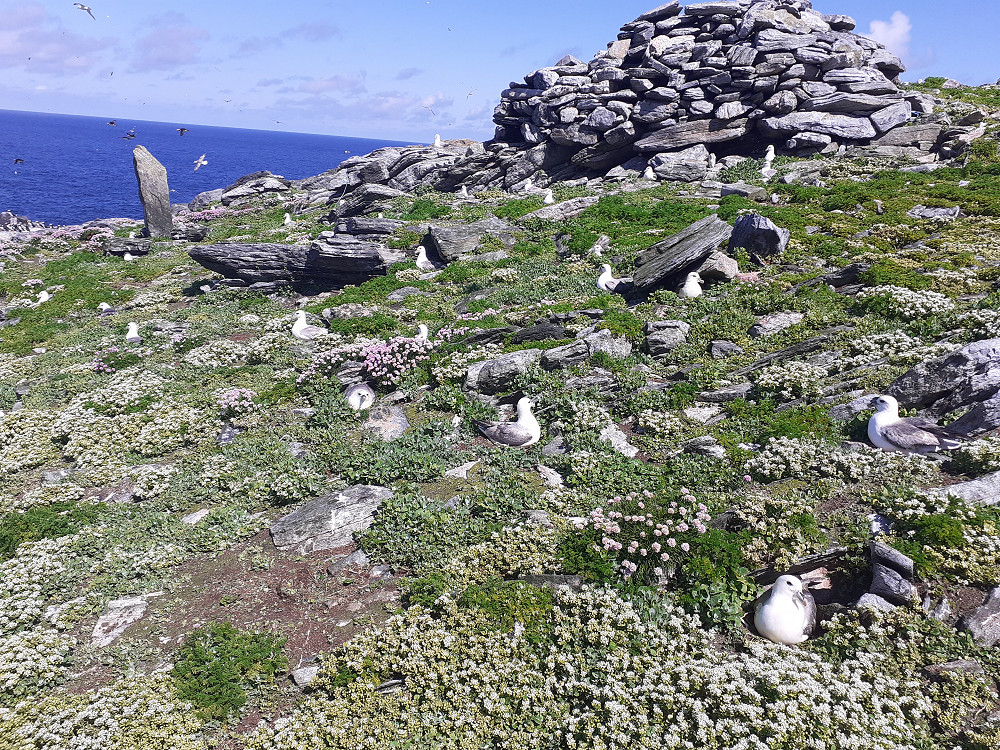 As we only had a short time ashore, I quickly picked my way through the fulmar, doing my best to avoid being splattered by their defensive vomiting, and set up the two rodent surveillance stations I had. I joined up with Iain Angus and Roddy who had been counting fulmar nests. On asking what the count was so far Roddy looked down at his clicker and in a dead pan voice said, ‘minimum of 853 nests’. He had only walked a couple of hundred meters. 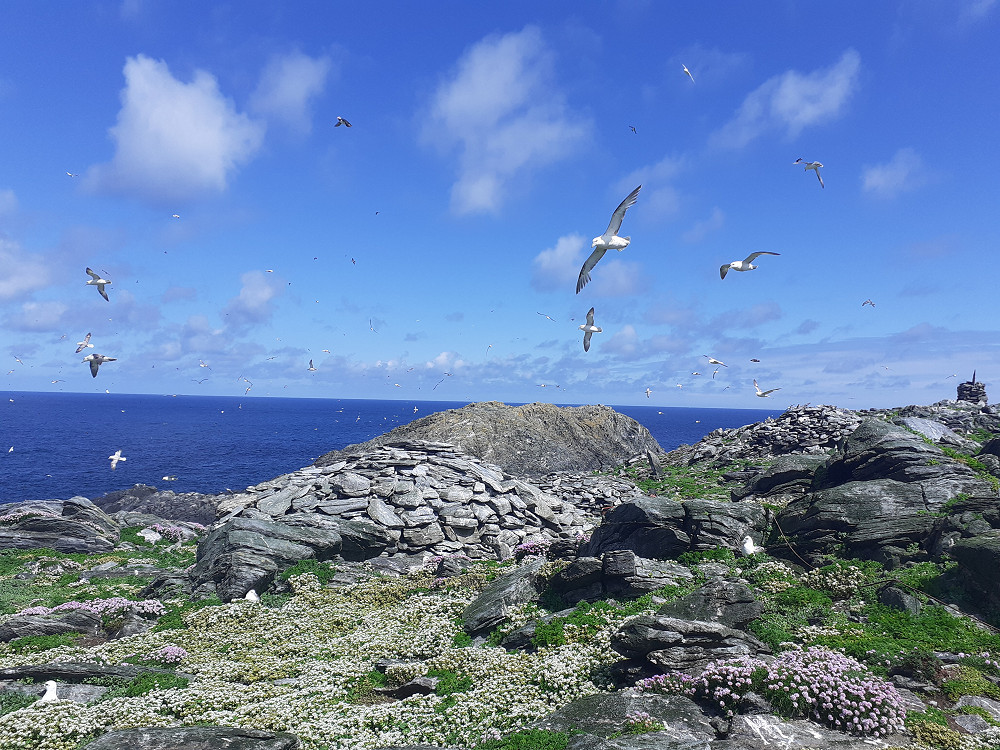 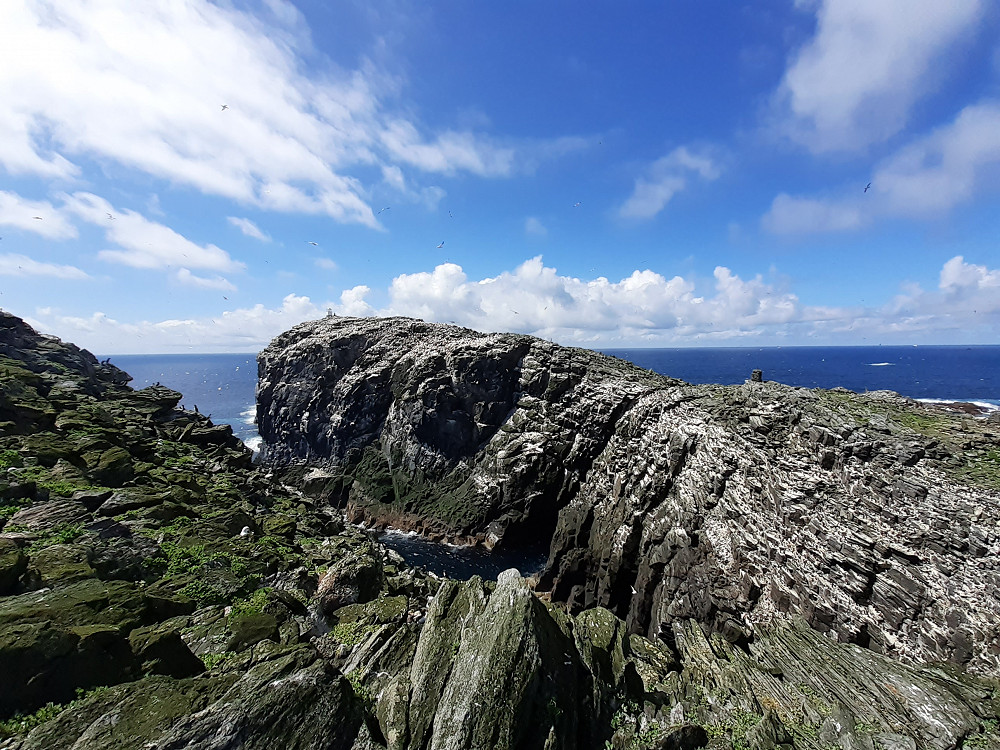 It was all too soon before we had to head back down to the landing and get back on board Enchanted Isle to start the 5-hour journey back to Harris.

We arrived back in Leverburgh at 19:20 in the evening, the boat was filled with weary yet happy faces. It was almost exactly 48-hours since we had departed. In that time all the counts had been successfully made on North Rona and Sula Sgeir, rodent surveillance had been installed on North Rona and partially on Sula Sgeir and we had managed about 9 hours sleep. Now that is what I call making the most of a weather window! 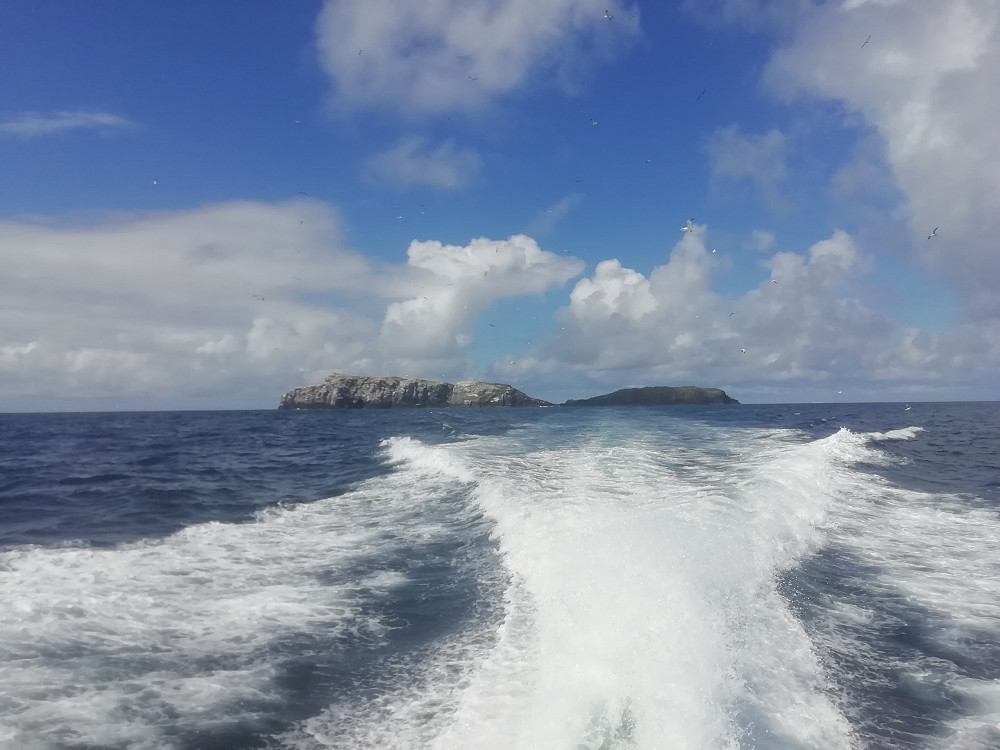 A huge thanks to the skill and knowledge of the Sea Harris crew, Daz, Iain Angus and Kieran on Enchanted Isle with Sea Harris for getting us to, on and off North Rona and Sula Sgeir safely and confidently, as well as being excellent company.