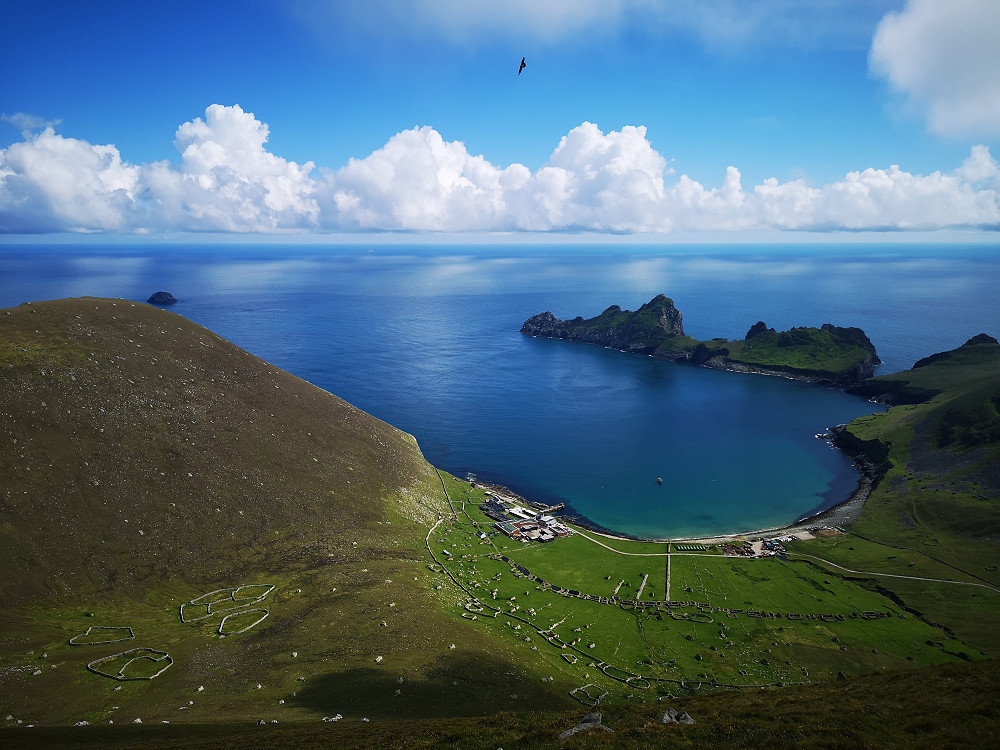 Seabird islands like St Kilda have biosecurity surveillance in place on pathways to stop invasive predators accidentally reaching the islands. If a predator manages to evade these barriers and reach shore it is important to respond quickly to protect the native wildlife. (Photo: Sarah Lawrence)

If an invasive predator is detected on an island or if there is a significant risk of a biosecurity breach (such as a shipwreck) then we need to do something about it quickly. Invasion by non-native predators is recognised globally as one of the greatest threats to island biodiversity and risks quickly impacting native wildlife. We should respond as quickly and as forcefully as if we were fighting a fire. No one would let a small fire grow before tackling it and risking it getting out of control and we should treat a non-native predator incursion with the same mindset. This is where Rapid Incursion Response comes into play.

A Rapid Incursion Response involves the mobilisation of people and equipment to contain and remove the incurring invasive predator as quickly as possible. In practice this involves getting people and equipment to the island, ideally within 48hours, and the setting up of additional surveillance, baiting and/or trapping grids and operating these for a minimum of six weeks or until any incursion has been confidently removed. To be confident that an incursion has been stopped we recommend a minimum of four consecutive weeks where no evidence of any invasive predator is detected through increased and intense surveillance.

By reacting quickly, the chance of being successful is increased (either through removing the animal or being more confident that it was a false alarm). A fast response reduces the time and distance an animal could have travelled since detection; for a large island this allows you to focus your main efforts around where the animal was detected rather than across the whole island. It also reduces the potential for a breeding population by aiming to remove any individuals before they have had the chance to breed. 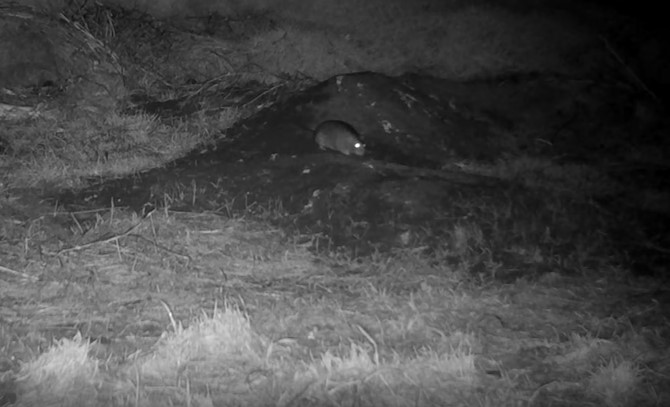 On island surveillance such as wax chew blocks or trail cameras need to be checked regularly so any sign of an incursion is picked up quickly. Brown rat on trail camera.

The challenge with mounting a Rapid Incursion Response is firstly a logistical one, with the need to mobilise a team of people who are trained to undertake the task and transport them to the island along with the required equipment all at short notice. Having a plan and resources in place is essential.

Currently in the UK there are only two islands that are adequately prepared and able to undertake such a Rapid Incursion Response: St Agnes in the Isles of Scilly and the Shiant Isles in the Outer Hebrides. This ability was developed as part of their respective successful rodent eradications, and as you can read below this capacity has had to be mobilised within the last 6 months. It also demonstrates how a Rapid Incursion Response can work.

During the remainder of Biosecurity for LIFE we will be working to create a network of Rapid Incursion Response hubs around the UK, so all our important seabird islands can react in the event of a biosecurity breach by a non-native invasive predator. We are basing our plans on Mountain Rescue teams who face a similar challenge when they receive a call out.

The hubs will be physical locations around the UK each filled with all the equipment and materials you need to do an Incursion Response. We will have several volunteer opportunities to be part of a hub and training will be provided to build up the skills required. We will look to have many volunteers attached to each hub so in the event of a potential incursion we would hope to find enough people available at short notice to form an initial team. Each hub will cover all islands within its geographical region allowing different organisations and land managers access to a pooled resource rather than each individual island maintaining its own equipment. The exceptions will be having small amounts of equipment on some of the very remote islands (such as Fair Isle) which can be very difficult to access during some periods of the year.

If you are interested in being part of a Rapid Incursion Response Hub then keep an eye on our website and social media channels as we will be releasing information on how you can get involved in the coming months.

In February 2021 it was a real community effort to ensure a rat had not returned to St Agnes and Gugh, Scilly.

Known as the 'Seabird Heritage Volunteers' of St Agnes and Gugh, they quickly scrambled to carry out intense surveillance for a possible rat biosecurity breach. They were able to respond and get bait and surveillance tools out within two hours due to the 'incursion hub' on island and the training they have undertaken to know exactly how to respond. 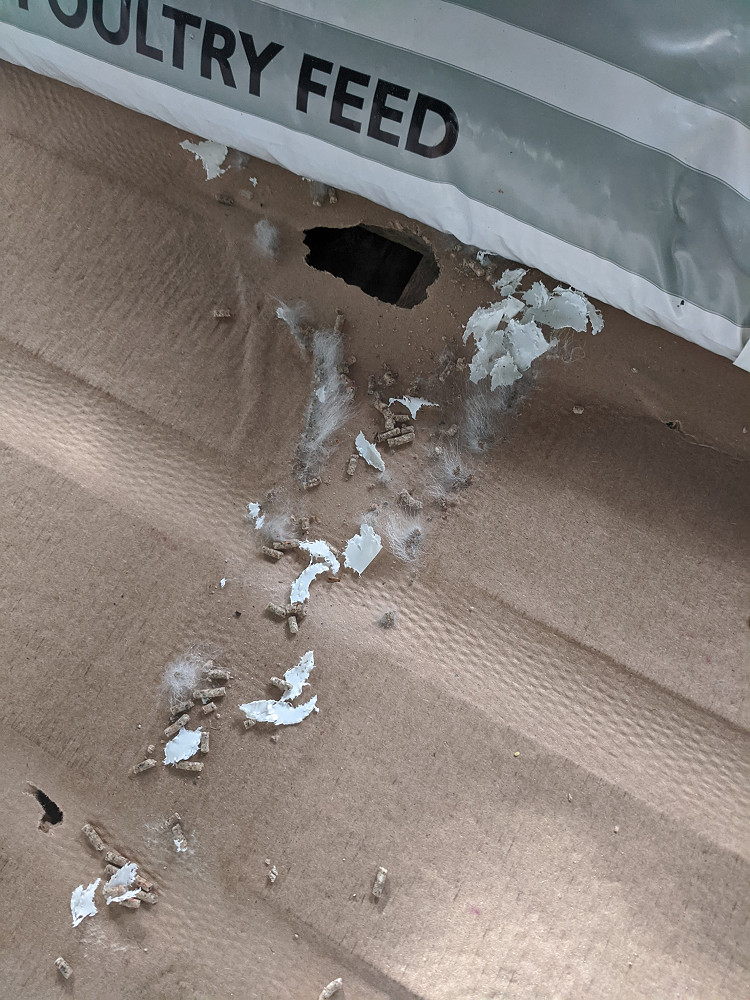 Rodent sign was noticed by a community member whilst unloading a pallet of chicken feed triggering a quick incursion response.

In 2013, brown rats were removed from St Agnes and Gugh as part of the 'Isles of Scilly Seabird Recovery Project' and the community do not want them back! Not only have the seabirds benefited without rodent predation, but the community has too (no more damage to livestock and property and they now watch Manx shearwater chicks explore outside their coastal burrows on summer evenings)

So, when two pallets of chicken feed were unloaded from the freight ship onto the quay, an eagle-eyed community member detected a rat gnaw mark on one of the bags. They immediately put an 'incursion response' into action with their fellow community members. 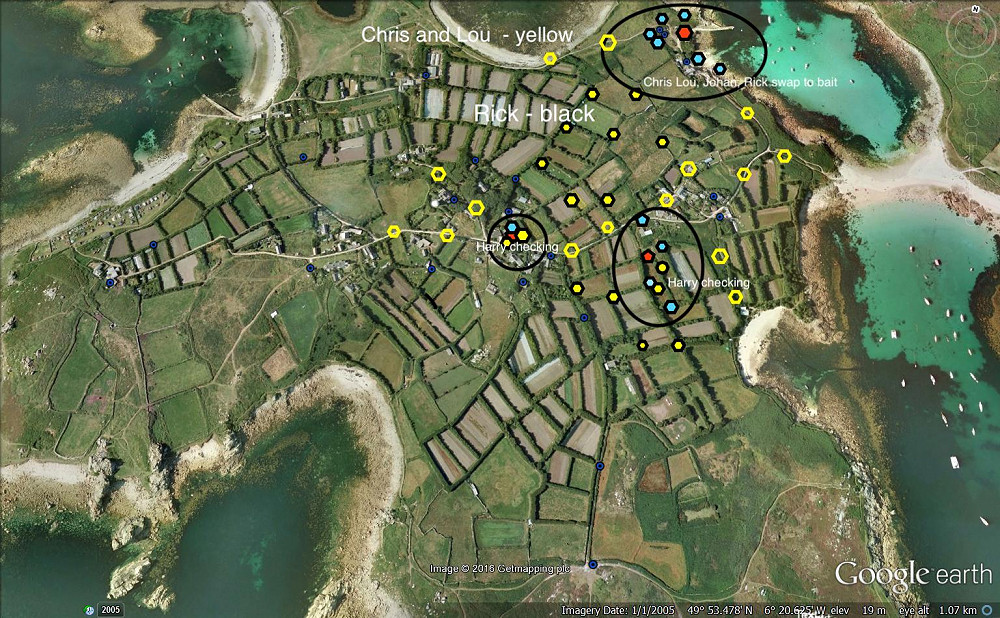 Map of St Agnes February 2021 Rapid Incursion Response. Each symbol represents a different incursion tool. The community where able to start setting this up within two hours of rodent sign being detected.

As it was highly possible that there could be a stowaway(s), they placed wax bait into lockable bait stations (Protecta boxes) around the area where the pallet had been offloaded. They carried out a full inspection of the area and then carried out possibly the most action - they assumed that a rat(s) could have left the pallet and moved elsewhere on the island (swam ashore or moved quickly across island).

Therefore all 20 island volunteers were informed and asked to check their permanent monitoring stations (there are 100 across the island). This is no easy ask for a busy community in the middle of a pandemic, but for these amazing volunteers - they got straight to it ensuring social distancing and safety at all times. A group of four volunteers added extra monitoring tools to the 'incursion response grid' including footprint tracking tunnels and trail cameras.

Over the next few days intense surveillance ensued, reducing to checks every second day, third day, until after 4 weeks, surveillance levels could return to normal. The community breathed a sigh of relief that a rat had not come ashore, and huge gratitude is felt by the Biosecurity for LIFE team - we are so impressed by this community and all they do to keep their island rodent-free. 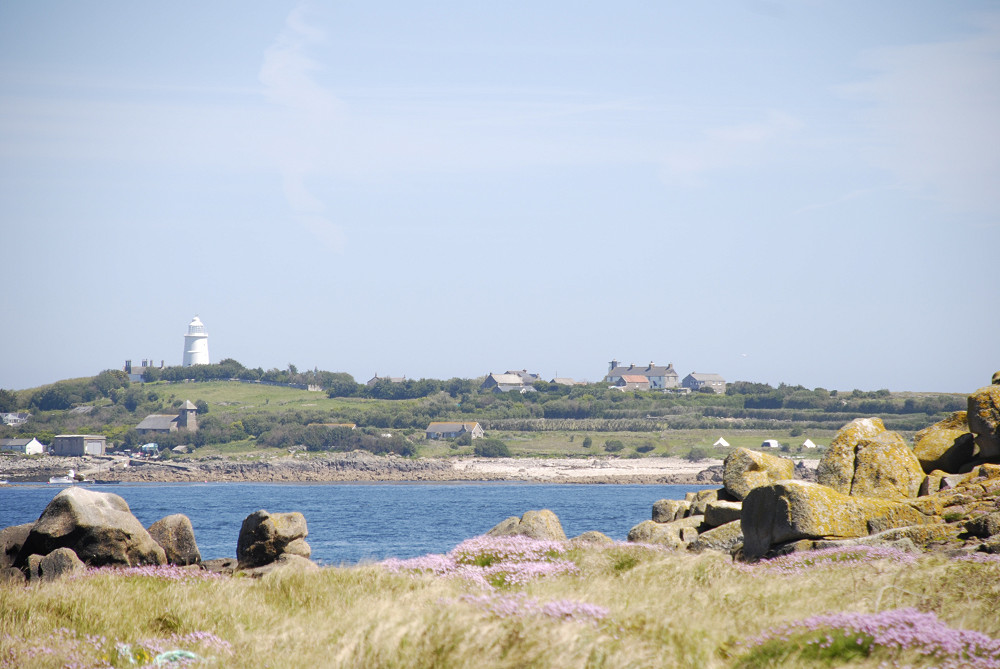 The knowledge, skill and commitment of the St Agnes community has made sure that the island has stayed rat free. (Photo: St Agnes, Jaclyn Pearson)

The incursion pathway (the journey of the chicken feed from the mainland farm, freighted to St Agnes quay) was investigated by our Biosecurity for LIFE Officer and all parties have carried out robust inspections and implemented the use of more surveillance tools around 'high risk' freight items. It will continue to be amazing partnership teamwork which protects special seabird islands, and for that we thank everyone involved.

Special thanks to community members Harry, Chris, Lou, John, and Trish on St Agnes for this incursion response during the restrictions of the pandemic. 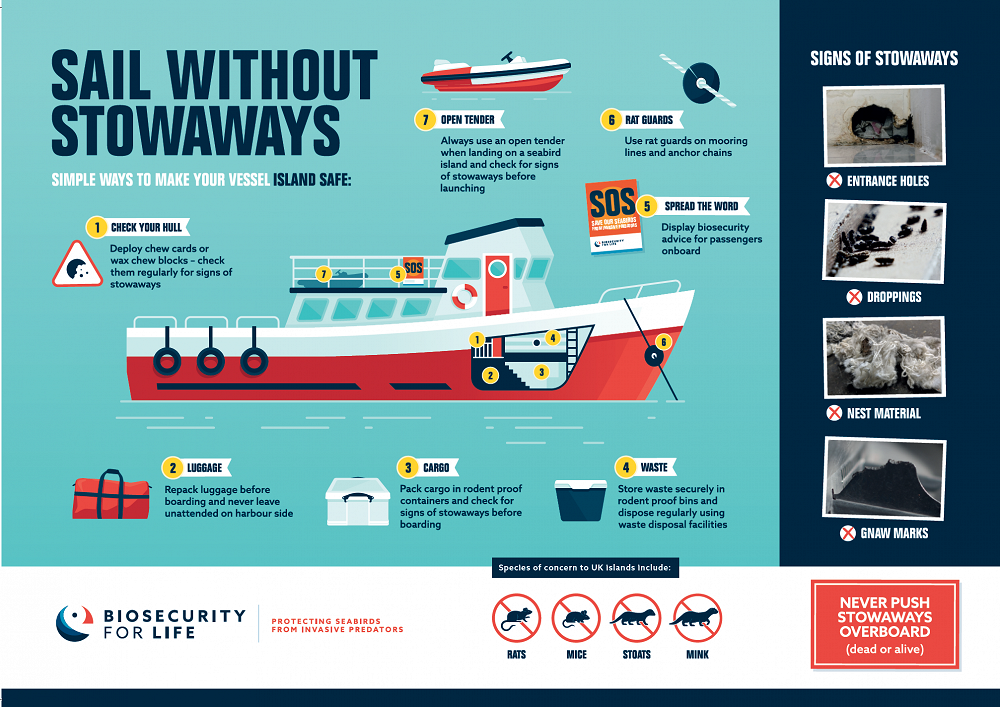 The accidental movement of rodents as stowaways on boats poses a threat to seabird islands. Find out what you can do to ‘Sail without Stowaways’ by looking at our freely available boat packs biosecurityforlife.org.uk/boats