There are two groups to the Farnes; the largest island on the Inner Group is Inner Farne, where St Cuthbert famously spent seven years living as a hermit, during which time he was said to tame the local eider ducks, now locally known as “cuddy ducks” in his name. Half a mile east across the Staple Sound, the Outer Group of islands includes Staple, Brownsman, and Longstone; from where Grace Darling and her father heroically rescued survivors from the Forfarshire in 1838. Many lighthouses have been built on the islands over the years, and the two remaining in operation are now managed remotely by Trinity House. 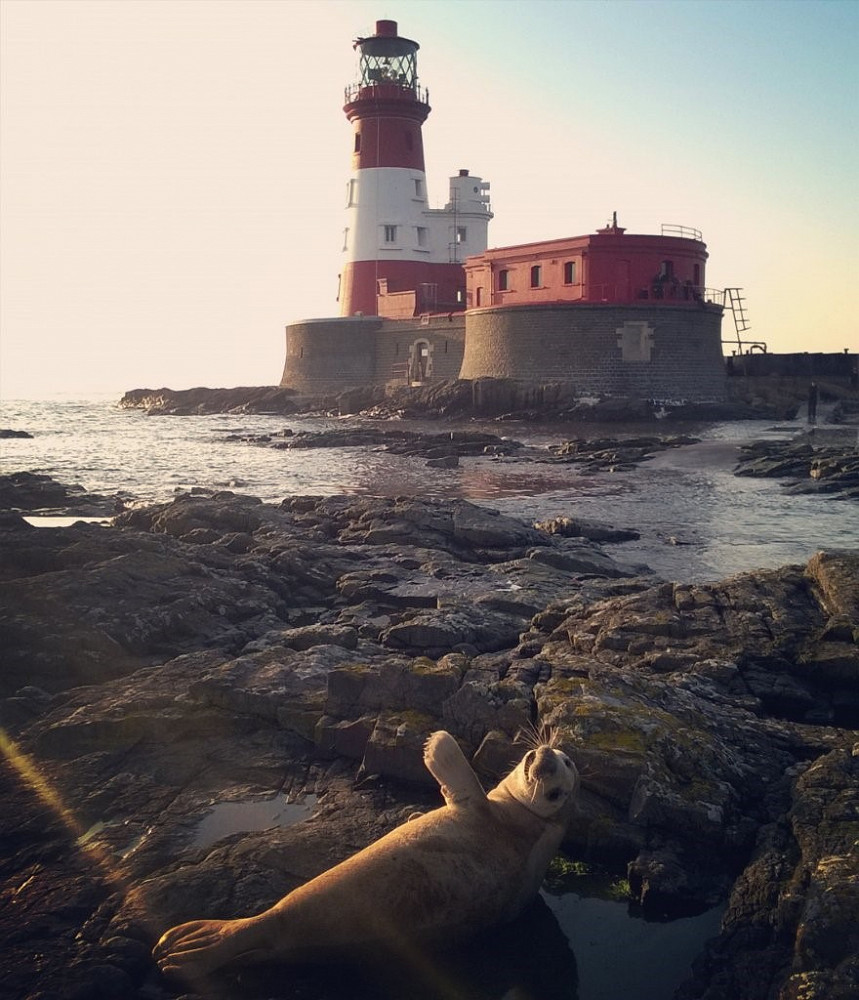 Longstone Lighthouse, from where Grace Darling and her father rescued the crew of the Forfarshire in 1838 Photo: Sarah Lawrence

The many thousands of birds nesting on the Farnes includes 2,000 pairs of Arctic terns (3.78% of the GB population), 65,751 individual common guillemots, and 43,752 pairs of Atlantic puffins. Landing on these islands is an experience for the senses, as visitors can find themselves in the heart of a seabird colony; amidst the swooping of Arctic terns defending their nests and the grumbling noise of puffins seeping out from the honeycomb of burrows beneath the boardwalk.

As well as their feathered inhabitants, the Farne Islands have a long history of human habitation, and over the centuries they have been home to monks, soldiers, lighthouse keepers, and now a team of National Trust rangers who are resident eight months of the year. There are many rocky outcrops, some with names such as Knivestone, Gun Rock, and The Thorn, and – as these names may suggest – navigating the islands can be treacherous! There have been hundreds of shipwrecks around the islands, including the one for which Gun Rock was named – where thirteen 16th Century concreted iron cannons still remain scattered beneath the waves. 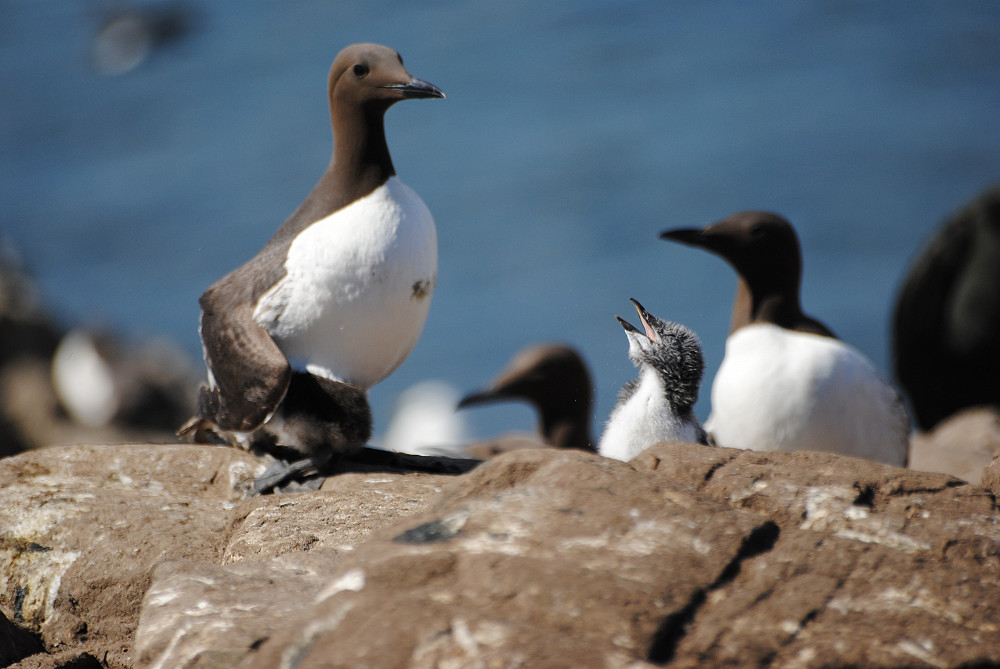 Guillemots with their chicks on Staple Island Photo: Sarah Lawrence

Throughout this long and varied human history, by extremely good fortune the Farnes have remained free from non-native predators. But although rare, the introduction of invasive species from shipwrecks remains a risk to the present day. A more recent incident involved the 250ft MV Danio, which came aground on the islands in 2013 after its crew fell asleep while on watch. On any given island, invasion of non-native predators is unlikely, but given enough islands over enough time, unlikely events become probable. The Biosecurity for LIFE project is setting up “rapid response hubs” around the country so that within 48 hours, equipment and a response team can be deployed to any island that suffers a shipwreck or suspects an invasive species has arrived.

We are working with the National Trust to update biosecurity plans and put measures in place to reduce the chance of an invasive species finding a pathway onto the islands. These prevention measures are vital, because it can be a huge challenge to remove invasive predators once they have arrived: one pregnant female rat could lead to the production of 300 rats within eight months! 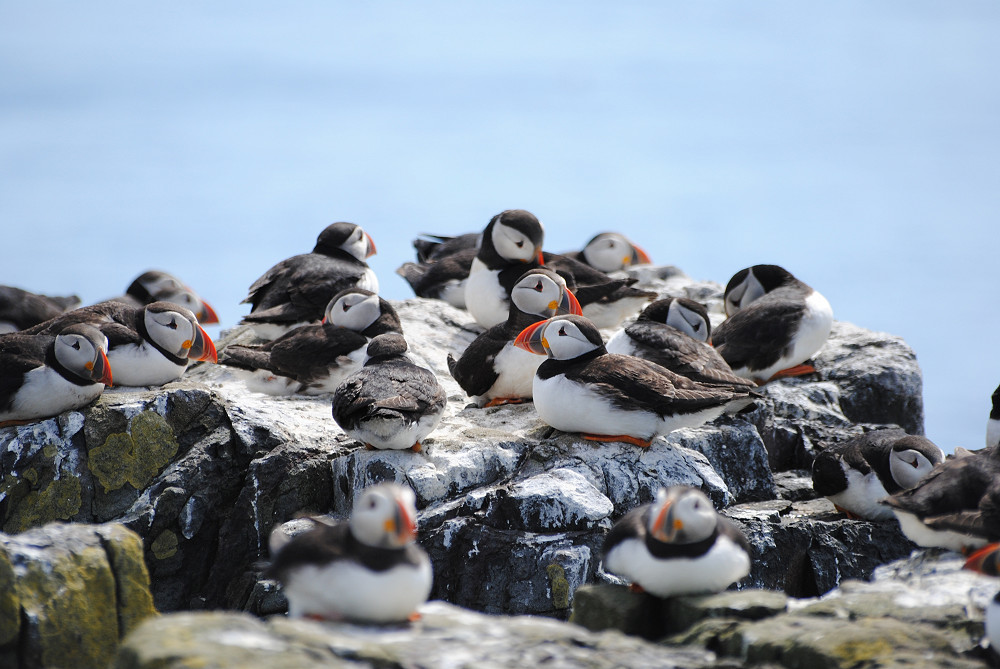 Over 43,000 pairs of Atlantic Puffin breed on the Farne Islands Photo: Sarah Lawrence

Biosecurity for LIFE and the National Trust are working together to develop a biosecurity activity for visitors to the islands, who can take some simple actions to help keep this fantastic seabird colony safe. Some top tips are to keep your food in sealed containers, re-pack your bag on the day of your visit, and never leave bags sitting on the harbourside before visiting the islands. You can also help by remembering biosecurity during your visit; telling a ranger if you think you’ve seen signs of rats or mice, and spreading the word to friends and family who may be visiting other islands.

The Farne Islands open to visitors on the 1st April, and the spring is a great time to watch shags building nests on the cliffs, and see puffins sprucing up their burrows ready for the breeding season.

For more information on visiting the Farnes: https://www.nationaltrust.org.uk/farne-islands. 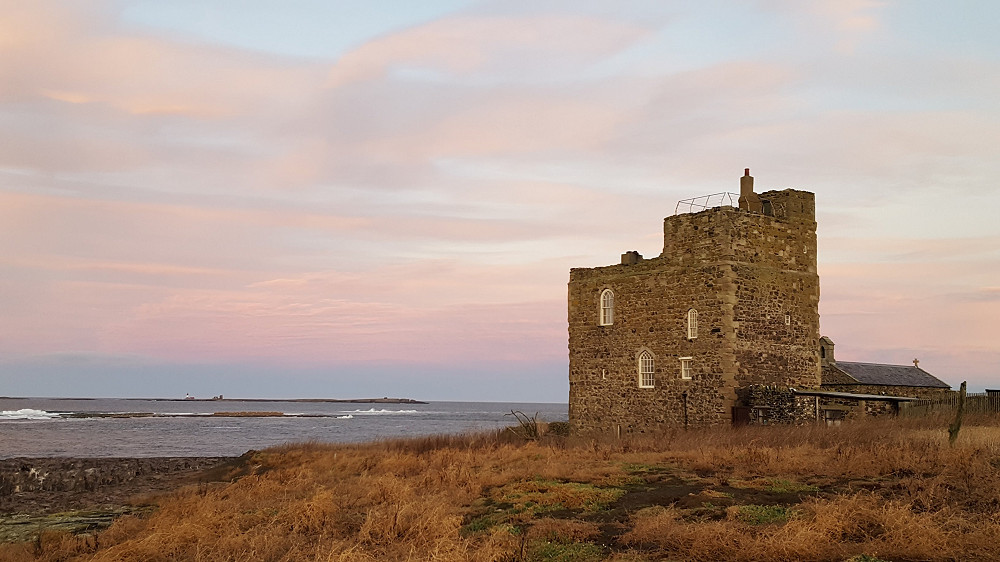