This week is Invasive Species Week and today puts the focus on biosecurity! Since August 2018 Biosecurity for LIFE has been working across the UKs 42 seabird island SPAs in partnership with RSPB, National Trust and National Trust for Scotland. Today we welcome a guest blog from National Trust to hear about the experiences from three of their important seabird islands.

The National Trust cares for some of the UK’s most beautiful and diverse seabird colonies – often on remote and sometimes uninhabited islands. Home to puffins and kittiwakes, Manx shearwater and eider ducks, these far-off places are havens for wildlife. For the Trust, biosecurity is paramount to keeping these seabirds thriving.

Here, three staff members from the National Trust reflect on the islands they care for – and why keeping them free of invaders is so important.

The Farne Islands, off the Northumberland coast, are home to thousands of breeding birds over the summer months, including red and amber listed species. They play host to colourful puffins – our clowns of the sea – which bash their beaks together in courtship rituals, and burrow into the soil. The high cliffs are turned white by gargling guillemots, packed like sardines on narrow ledges. Kittiwakes stand out with their white and grey plumage whilst the shags make mischief stealing nesting material or preening their characteristic quiffs. Along the boardwalks, the eider ducks watch the visitors go by, while the terns screech and show off their catch of the day.

These incredible scenes bring to life why it’s so important we protect our seabirds from non-native invaders. If a rodent, such as a rat or a mouse, arrived on an island it could wreak havoc on the bird colonies, putting eggs and young at risk. Biosecurity is an essential practice which makes sure we’re protecting these seabirds and giving them the best opportunity to thrive.

We’ve had great support from the Biosecurity for LIFE project, by way of resources, training, and advice. We have had teaching sessions during staff inductions and posters and leaflets to interest and educate the public. Visitors have responded well – they’re curious as to how we manage these remote places.

Across the site we have wax bait stations, which are checked regularly, and camera traps to capture potential rodent activity. We’ve also taken steps to inform and include the harbour community and the boats that transport visitors, which means that they can start monitoring their boats for rodents.

All this meant that when a dead rat was found outside of the breeding season, we followed a plan to monitor the island until we were sure it was a one-off discovery. If we were to find teeth marks in wax blocks or strange droppings – we know there is a team to help give us answers. The project has instilled good practice, provided resources, and raised awareness to help protect the Farne Islands.

The tiny 21-acre, uninhabited island of Middleholm (also known as Midland) lies just off the Pembrokeshire coast. Along with the neighbouring islands of Skomer and Skokholm (managed by the Wildlife Trust of South and West Wales), it forms a designated Special Protection Area due the significant breeding population of seabirds. Storm petrel, kittiwakes, razorbills, guillemots, puffins, Manx shearwater and lesser black-backed gull are all key species here.

Middleholm often gets overlooked by its bigger sister islands, but surveys have shown that this tiny island is significant in its own right, with important numbers of breeding auks, shags and cormorants. A census of Manx Shearwater in 2018 showed the island supports at least 16,000 breeding pairs or 1-2% of the world’s breeding population, making it one of the densest colonies in the world. So, naturally, we’re quite proud of it! 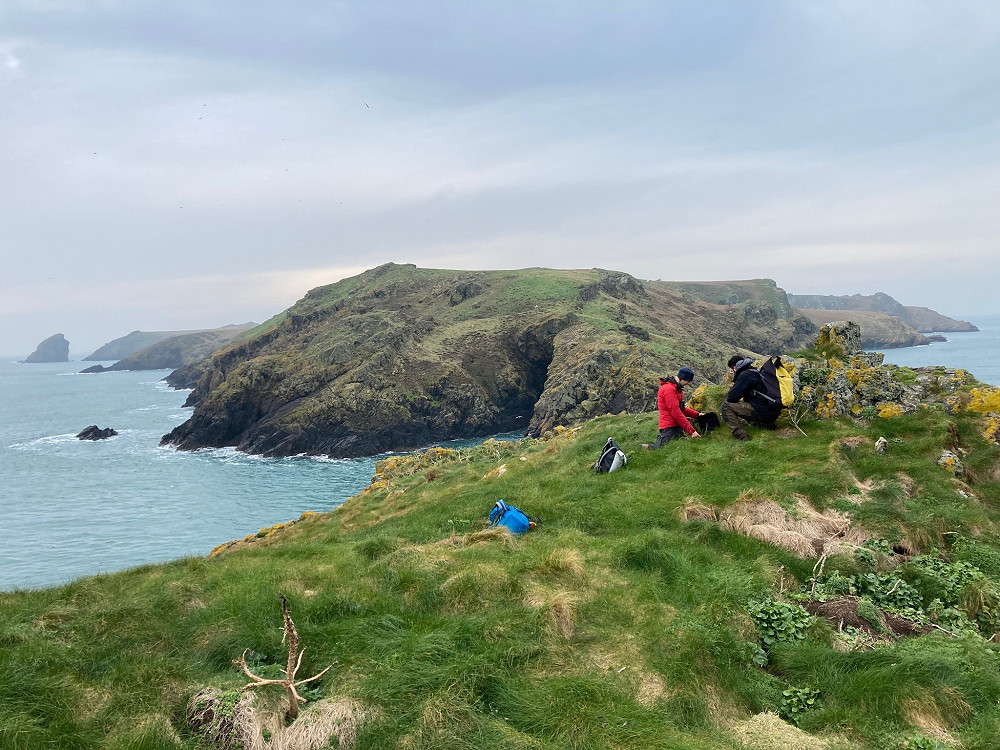 These amazing numbers of seabirds mean biosecurity is ever more important. Over the last year, we’ve ramped up surveillance of non-native species through the installation of 12 permanent bait stations across the island. These are baited with chocolate wax, as well as a camera trap. We aim to check the surveillance at least twice a year – but access to Middleholm presents challenges, not least the lack of landing area and tricky terrain, but also the weather and tidal conditions. We’re limited to visits during the early spring and late summer so as not to disturb the birds during breeding.

Thanks to the Biosecurity for LIFE project, we now have a new interpretation panel which has been installed at Martin’s Haven on the mainland; the main embarkation point to the islands. It highlights the issue of biosecurity and explains what visitors can do to help keep these amazing islands safe from invasive non-native predators. 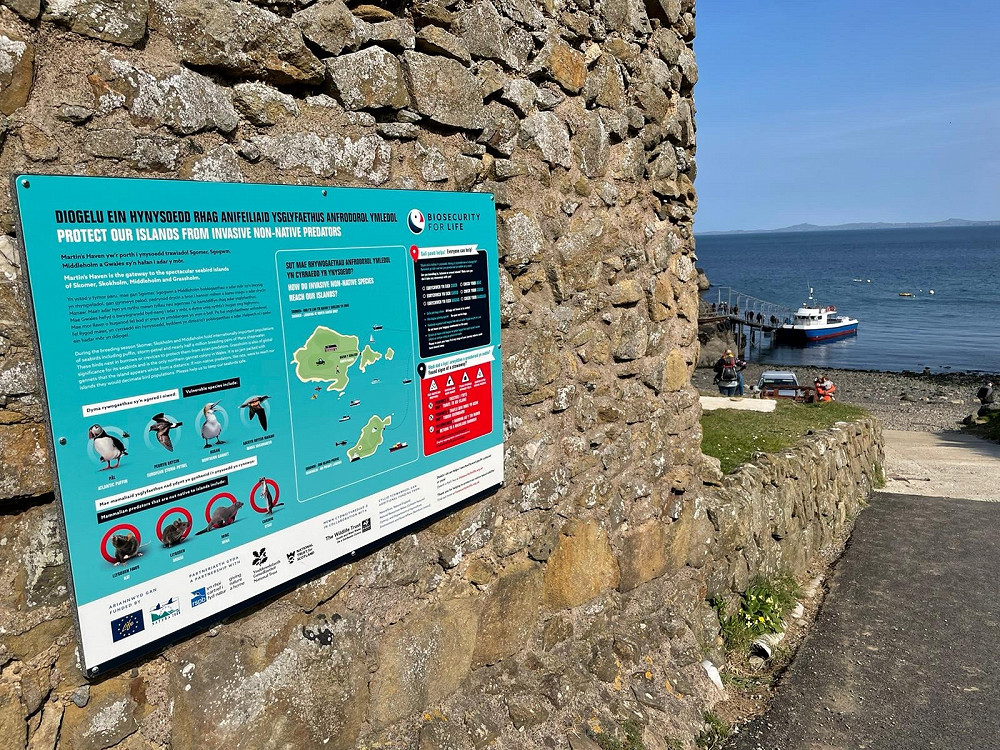 Sheep Island stands tall and proud, half a kilometre off the North Antrim Coast. This small (c 3.5 ha), uninhabited island is very exposed with rocky shores and near vertical cliff faces – and accessing it is not for the faint-hearted!

The island has a fantastic seabird colony and is recognised as an Area of Special Scientific Interest and a Special Protection Area. It supports an important breeding population of cormorant, whose numbers declined between 2005 and 2015 and stabilised in recent years. Records show that puffins formerly bred on Sheep Island, which is only 10 miles from the established puffin breeding colony on Rathlin island.

In 2021, the first census using a drone (under the MarPAMM project) revealed 139 breeding pairs of cormorants, the highest count since 2010. It picked up other breeding seabirds too - fulmar, common guillemot, shag, razorbill, great black-backed gull, herring gull, lesser black-backed gull, and kittiwake. Individual Arctic tern and puffin were also counted.

Protecting these spectacular birds and their nests is so important. There is a history of rats on the island, however, the number of ground-nesting species counted by drone provided some hope that the rats were no longer present. But we needed to find out for certain. 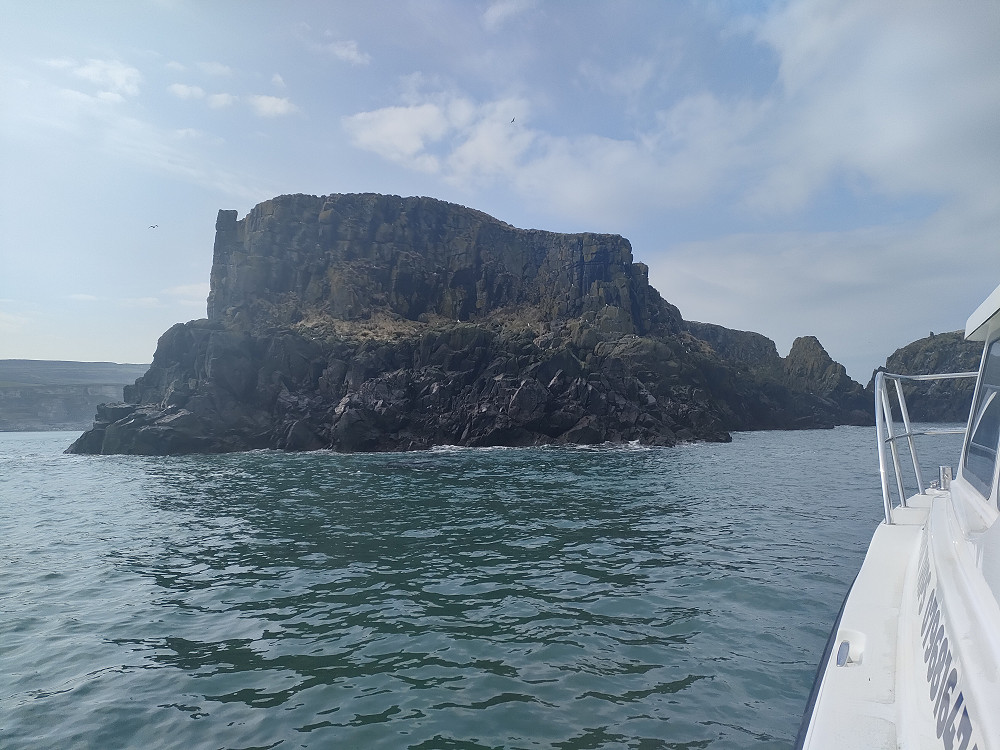 In March 2021 we managed to set foot on the island with Northern Ireland Environment Agency and the Biosecurity for LIFE project. This involved coasteering along the rocky shore to reach the cliff face, then using a rope to reach the top of the island. What greeted us at the top was well worth the effort - spectacular views of the rugged coastline, including Ballintoy Harbour, Rathlin, even over to Scotland, and plenty of curious seabirds.

We left surveillance equipment on the island for a month. The wax chew blocks and boxes had been avoided but the camera footage revealed, sadly, conclusive evidence of rats. We’re now working in partnership with RSPB to produce a biosecurity plan and decide the best means of eradication. We’re grateful for the support of RSPB and Northern Ireland Environment Agency and are developing our knowledge of this amazing seabird site all the time.

One day, we’d love to see the puffins return. 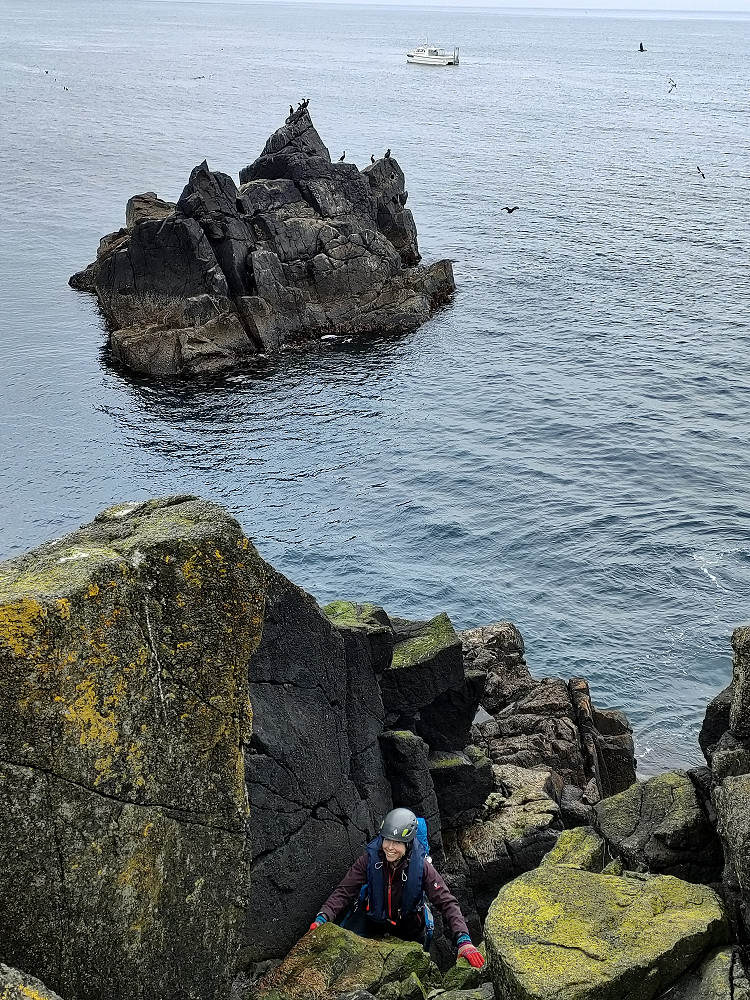 Tragically, this year our seabirds are facing an unprecedented and widespread outbreak of Highly Pathogenic Avian Influenza (HPAI). The disease originated in poultry in Asia, passed into wild birds, and has led to multiple serious outbreaks, including the loss of 1/3 of the Solway wintering barnacle goose population last winter. A wide range of seabird species have been confirmed as infected and we are seeing large die offs of several species at their breeding colonies.

From the edge of the world - biosecurity on St Kilda

Here we welcome Sue Loughran, St Kilda ranger with National Trust for Scotland to tell us about biosecurity ‘From the edge of the world’. In the last few weeks we have been working with Sarah Lawrence (Biosecurity for Life Project Officer) to improve our measures for the islands of St Kilda, but what does “biosecurity” actually mean? How do we carry it out? How can everybody play their part?

It has been a month since Jinx arrived with the project. Here Greg Morgan Jinx’s handler gives an update on how he is settling into island life.