It was almost exactly one month since I had been on the Flannans – deploying rodent surveillance stations on three islands in one extremely busy day. As we set off from Miavaig jetty with SeaTrek, I wondered if we would be lucky enough to have another calm day at the east landing place on Eilean Mòr; the sea state seemed much poorer than last time – but to our delight the water around the Flannans was surprisingly calm – a rare occurrence!

Safely ashore, we began the 195-step climb up to the top of the island, and once again stopped at Charring Cross (where the old railway line between the lighthouse and the two landing places divides) to prepare for the day ahead. While the Seabirds Count team set up calibration transects and began the Leach’s petrel and European storm-petrel tape-playback surveys, I headed out to re-find the biosecurity surveillance stations I had set up one month prior. I had brought a bag full of extra pegs, and made minor adjustments to the location of a couple of boxes: one I felt might disturb the view for any rare tourists who may reach the island, and the other I moved closer to the west landing place, where I found puffins queueing up on the long, narrow staircase down to the landing place as though waiting for a boat.

Puffins queueing up on the long staircase down to the west landing place on Eilean Mòr. Video: Sarah Lawrence

The Flannan Isles are listed as being free from invasive predators including rats and mice – although they’ve rarely been surveyed – so I was surprised to find chew marks on a wax block inside one of the surveillance stations. On initial inspection, these marks seemed almost mouse-like, about 0.5mm per each tooth scrape, fairly neatly chewed (unlike rats which are messy eaters and each tooth is 1mm in width). I took the block out into the sunshine for closer inspection, and on the base of the block I found one chew that was definitely four parallel tooth scrapes together. This was a relief because it suggests the chew marks belonged to a rabbit, which leave four tooth scrapes. The surrounding evidence backed up this theory: rabbit droppings galore! The Protecta surveillance stations we use have small entry holes on either side, that exclude larger animals – but it seems this young individual was keen on chocolate wax – which will have done it no harm. 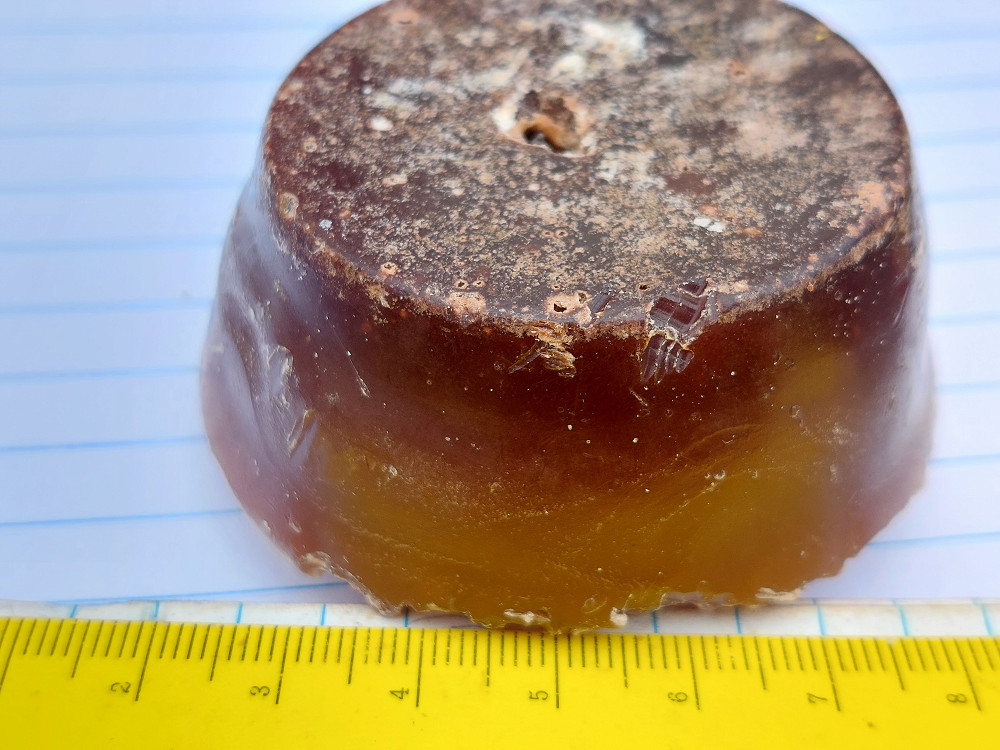 Four parallel grooves in this chew mark on the top of the wax block suggest that the toothmarks belong to a young rabbit. Photo: Sarah Lawrence

After a couple of days rest on the mainland, the team was back out for a second day on the Flannan Isles. This time we would split up: with half the team returning to continue calibration surveys on Eilean Mòr. The wind had changed, so the west landing place was the only option for the day: not our first choice, as many of the steps are missing so a slight scramble is required before reaching the top. With the Eilean Mòr team safely delivered, the rest of the team set off in the RIB to attempt landing on Eilean Tighe. We crept around the coast of the island, assessing where we might be able to jump out onto a suitable rocky ledge, and whether it would provide us with an easy route to the top of the island. Eventually we decided on a ledge, and seconds later it was time to jump ashore… The Flannan Isles have brilliant natural defences as described by T.S. Muir in 1859, “On all sides it rises in mural precipices and very steep turfy slopes, at once from the sea”.

After a careful climb behind a cave and past a minefield of fulmar chicks threatening to spit their pungent fishy regurgitate in our direction, I went off to check the surveillance stations before joining in with petrel surveying for the rest of the day. It was a successful check of Eilean Tighe, with no signs of any chew marks (this island is rabbit-free). 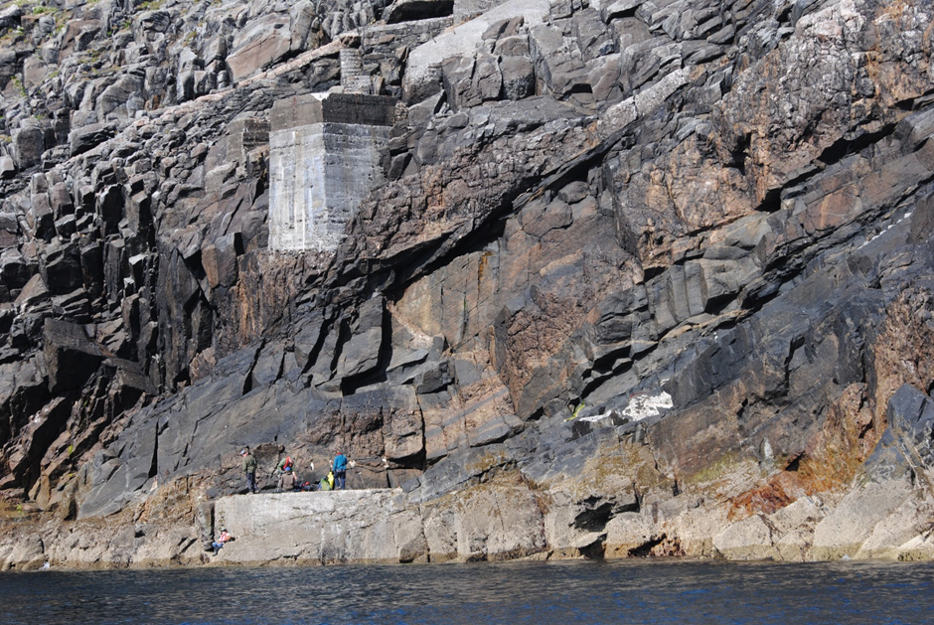 When visiting this island back in June, I had been thrilled by the carpets of bright pink sea thrift, and it was exciting to see the thrift replaced by beautiful mayweed and ragged robin. Now all the birds that had been dutifully sitting on eggs and small chicks back in June were tending to large healthy chicks – including one razorbill chick that had clearly never seen a human before, and continued preening and yawning quite nonplussed as I passed it by. By now (mid-August), most of these birds – except the petrels and gannets – will be at sea, preparing for their first winter in the North Atlantic: the fast pace of the seabird breeding season never fails to amaze me, and it’s great to think that we’re ensuring these chicks will still have a safe and predator-free island to return to for many years to come. 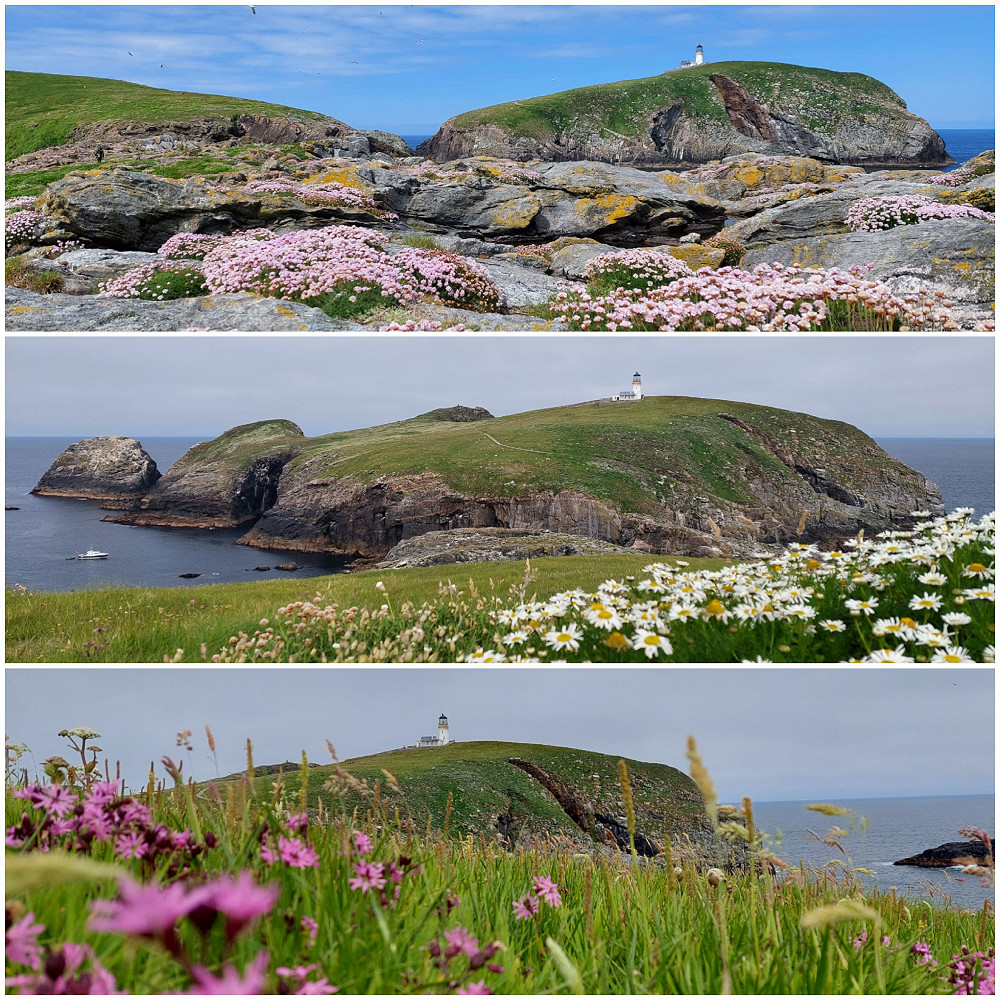 The changing face of Eilean Tighe through the summer; sea thrift replaced by mayweed and ragged robin. Photo: Sarah Lawrence 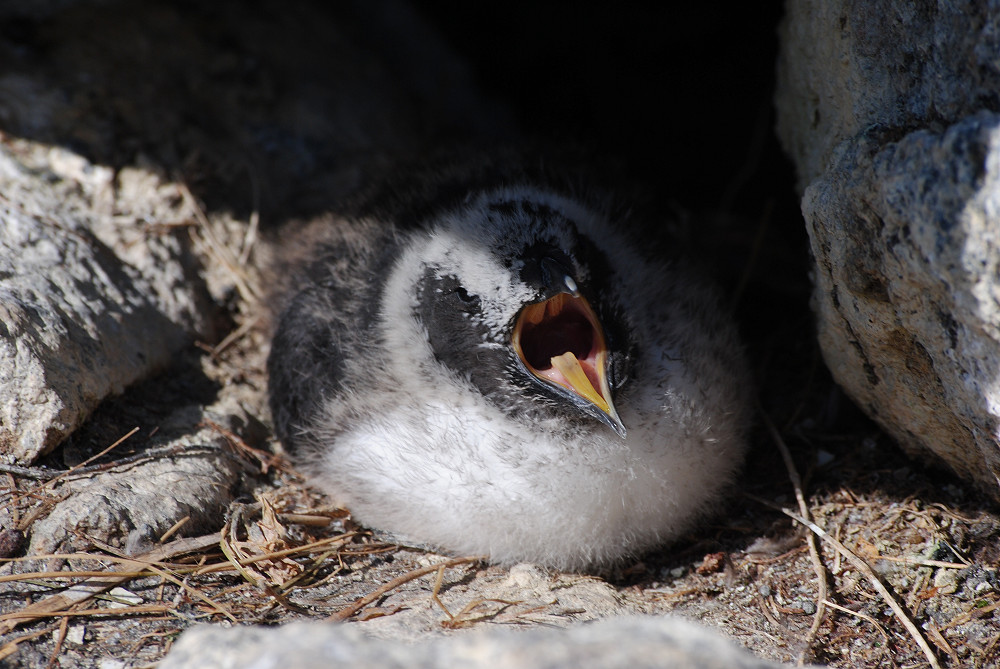 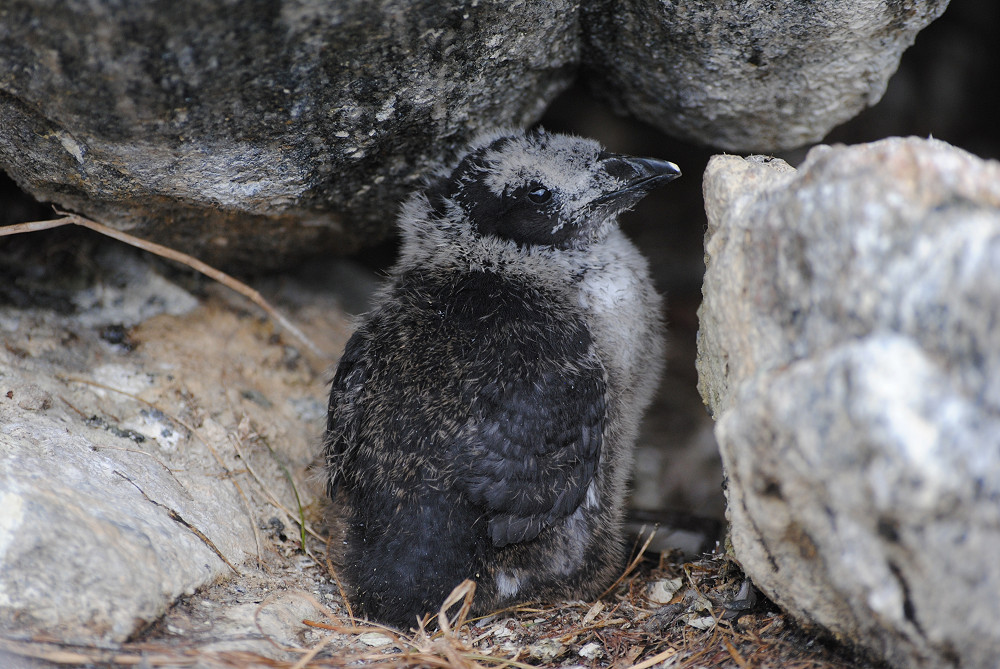 The next day we set off for our third and final day on the Flannans. After sailing around the three small islands at the south of the archipelago: Soraigh, Sgeir Toman, and Sgeir Righinn, to see whether a landing might be possible (it wasn’t…), we headed to the westernmost Flannan Islands, and soon we were ashore on Roaiream, where we made another climb up to the top of the island. Roaiream is a small and infrequently visited island where the Flannan Isles’ growing gannet colony is located. 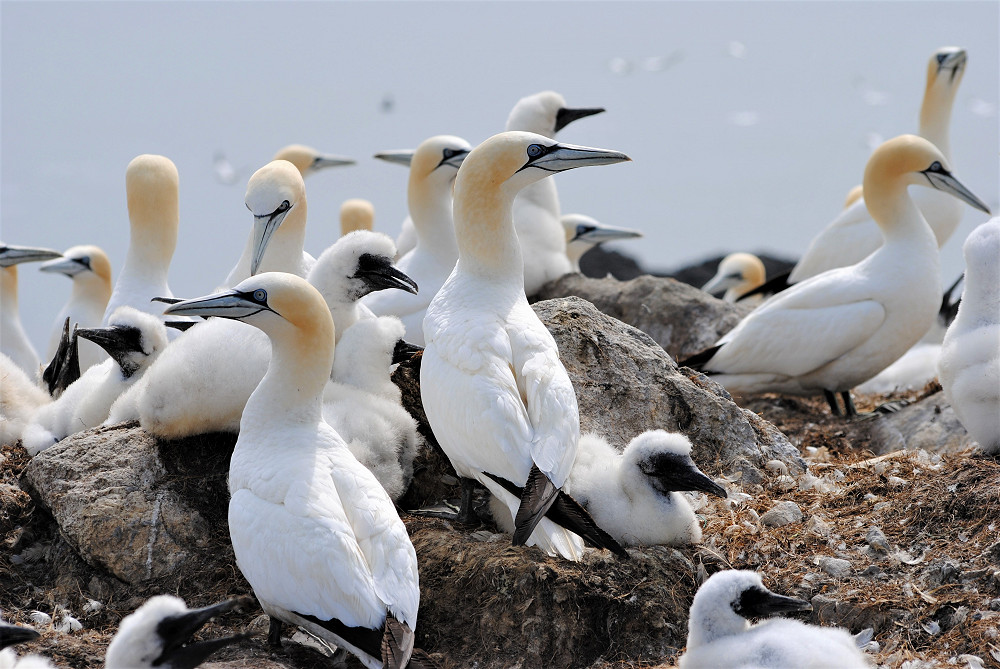 There were no signs of any chew marks on Roaiream’s one surveillance station – and this final box signified the end of my task for the trip: to make the first check of all biosecurity surveillance boxes on North Rona and the Flannan Isles! Being familiar with the often challenging weather and sea conditions on the Atlantic Outlier islands, the plan to get biosecurity deployed on North Rona, Sula Sgeir, and the Flannans in one fell swoop had seemed ambitious at the start of the season: we would have been happy to get to just one of these islands. So to reach the end of seven weeks of Western Isles fieldwork with biosecurity set up on all of these islands and – crucially – the first check made on all except Sula Sgeir, is a really positive step for biosecurity on these islands.

The challenge now is to ensure that routine surveillance checks are made on all the islands on a regular basis. This is a task that we hope “regular” visitors such as bird surveyors and the Northern Lighthouse Board can help with, but we are also keen to hear from anyone planning a visit to the Flannan Isles. Please do get in touch if you may land on these islands; we can send you a map of the surveillance stations with instructions on how to make a quick check. The more often these stations are visited, the higher the chance that any rodent incursion could be detected and dealt with before a breeding population is able to establish.

Biosecurity duties done; I spent the rest of this final day on the Flannans surveying petrels across Roaiream. It was an added delight to experience the island’s gannet colony, where most of the chicks were at the “cottonball” stage, and I was lucky enough to take a few quick photos of these fantastic birds while the team were ringing the chicks under BTO license.

This is the last in our series of blogs from the Atlantic Outlier islands for 2021, and we wish to thank Jim Lennon for allowing us to collaborate with Seabirds Count team and the Shiants Auk Ringing Group during their Western Isles surveys this summer – it has been some fantastic partnership working as well as great company on these incredible islands. 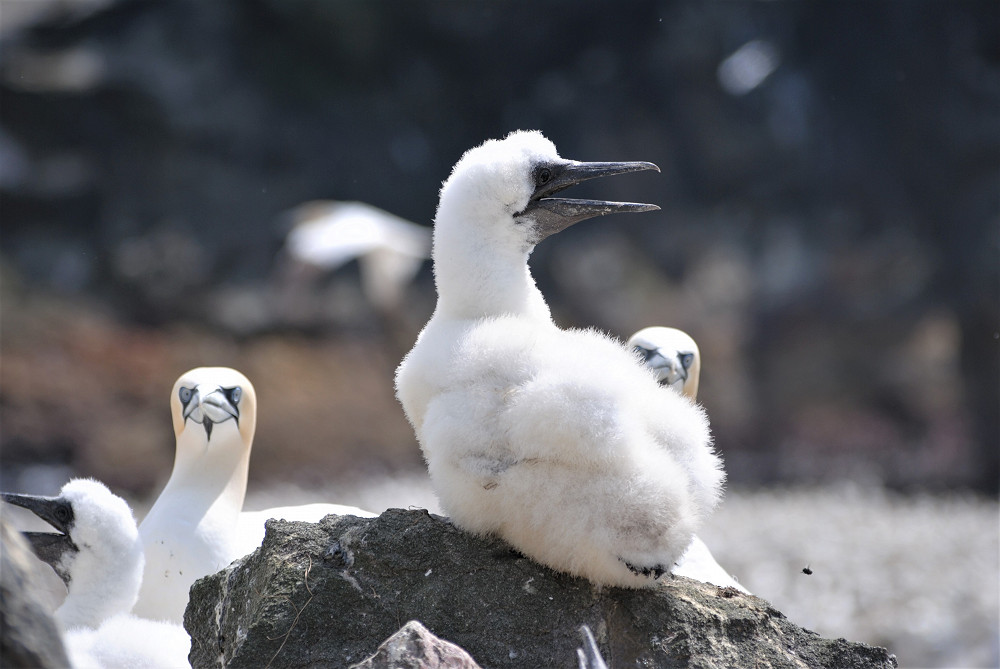