Unlike our trip in June, this time there was no waiting around for the weather, and just as soon as the team had assembled on Harris, it was time to securely pack and complete biosecurity checks on all of our equipment before loading and boarding the boat to North Rona. We set sail from Leverburgh with Sea Harris on the evening of Tuesday 13th June in idyllic conditions. The sea was flat calm, allowing some fantastic sightings of otters, minke whales, harbour porpoises, and common dolphins during our five hour journey north. By 1am, we reached North Rona in pitch darkness; it felt strange to be welcomed in such a remote location by three streams of light from the North Rona Lighthouse beaming through the mist that was blanketing the island. Conditions were so calm that we were able to land at Poll Thothatom on the south of the island – our first choice, as this meant we were as close as possible to our base at the Sea Mammal Research Unit’s hut. As the team were ferried ashore, I noticed a rare treat in the water below us – the green sparkle of bioluminescent plankton glowing as our boat disturbed the water!

Once ashore, the most critical items (tents, sleeping bags, and breakfast!) were carried up to our base, and our tents were set up in record time as the team fought to escape our welcoming party: the midges of North Rona – who can’t get many opportunities to greet visitors in their usually windswept location! 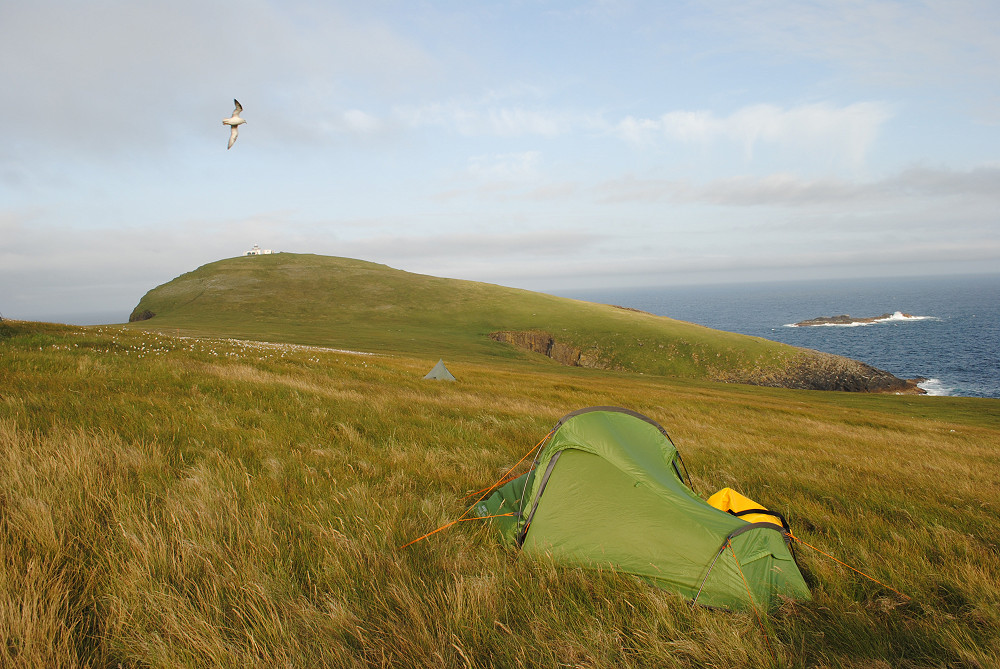 By the next morning the wind had picked up a little, and we set about the main task of the trip: surveying Leach’s petrels and European storm-petrels (all petrel surveys were completed under license from NatureScot). The first job was to set up calibration transects, which involved setting bamboo canes every 10 metres along transect lines 50 metres apart. Petrels are surveyed in daytime by playing a recording of their song while the adult petrels are sitting on their nests. The petrels will sing back in reply to these recordings, and each reply – along with its distance from the survey point – is noted down. Not every bird will reply to the recording each time, so the calibration transects would be revisited on as many days as possible during the trip to work out the rate of replies in each survey area. This information can be used to estimate the actual number of birds nesting in parts of the island that are only surveyed once. 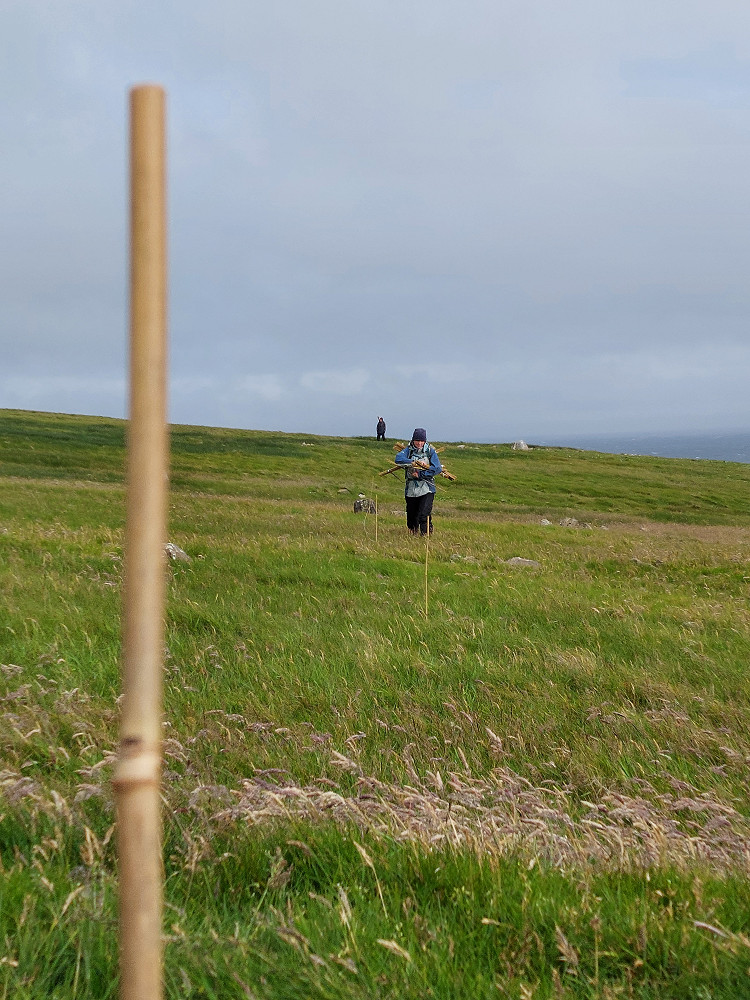 On day two of the trip, the sun came out and the wind calmed down, and I set out to revisit the 24 biosecurity surveillance stations that Tom set out during his June visit. With GPS in hand, I made a full circuit of the island, starting north of the SMRU hut, and working anticlockwise along the coast. North Rona is listed as free from any invasive non-native predators – but there is no evidence anyone has looked for them previously – so it was fantastic to complete a first check and find absolutely no sign of any invasive rodents interacting with any of the surveillance equipment. This was also a good opportunity to replace some of the wax chew blocks that had become mouldy since they were deployed – although most were still in very good and chocolatey condition. Surprisingly, wax in one surveillance station had almost melted off its wire in the heat of the North Rona summer! 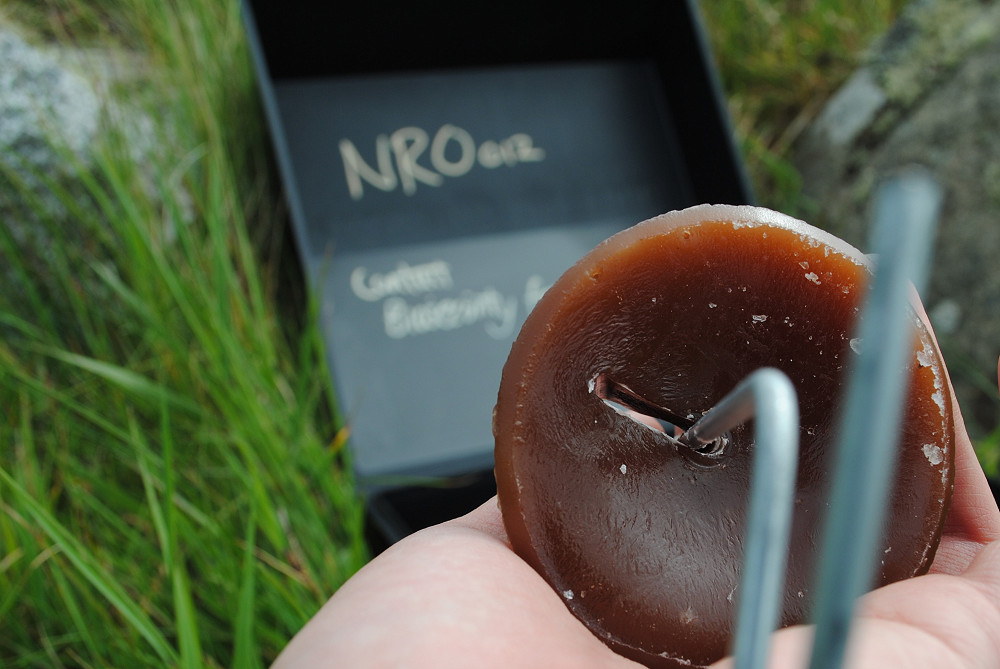 Chocolate flavoured wax in a surveillance station on North Rona showing no sign of rodent gnaw marks; the heat in this box led to the wax almost melting from its wire. Photo: Sarah Lawrence

Although we talk about them a lot, biosecurity surveillance isn’t all about wax chew blocks. On my way around the island I took the opportunity to search for other signs of invasive predators. There were several muddy pools drying out on the south west of the island, which make perfect natural footprint tracking cards. These can be great through-routes for mustelids, and we have found otter footprints in similar locations while surveying other Hebridean islands, so I took a good look at every pool I found. Fortunately, the only footprints belonged to a variety of birds – mainly gulls and rock pipits. 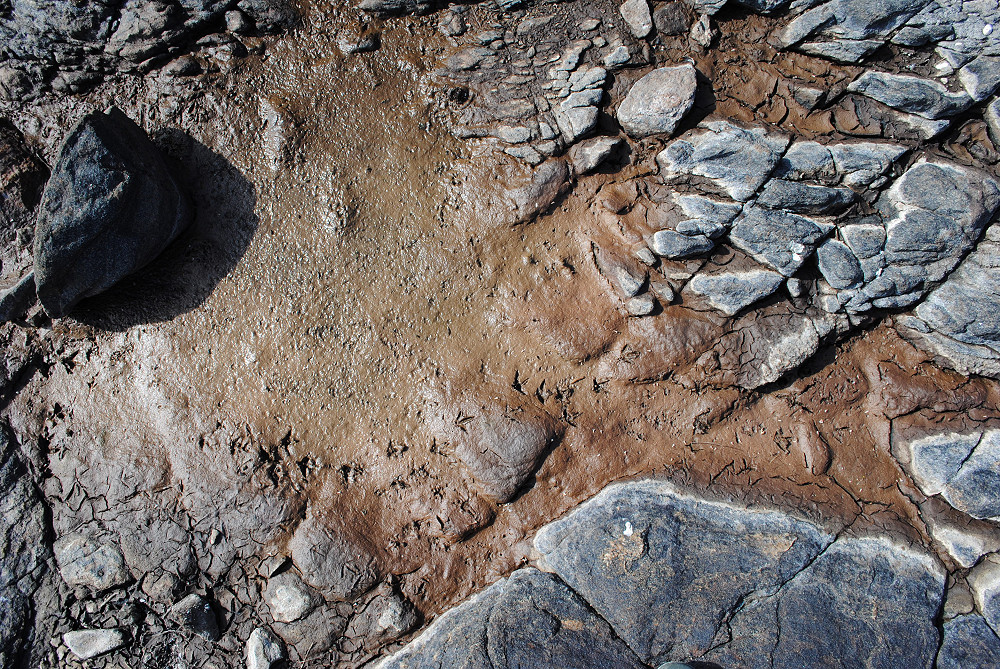 It’s always worth checking the mud in dried-up pools for signs of rodent or mustelid footprints – they are excellent “natural tracking cards”! Photo: Sarah Lawrence

Biosecurity checks complete, I re-joined the Seabirds Count team, and spent the next three days surveying petrels on the low-lying Fianuis peninsula on the north of the island with Alister, Carole, and Ian. We wound our way back and forth across Fianuis, stopping every ten metres to listen intently for petrels replying to the recording. The tuneful reply of a Leach’s petrel was always a treat, and on each response we would measure the distance of the bird from our survey point. Occasionally the birds would then “set each other off” and it felt like we were in the middle of an enthusiastic petrel conversation. Leach’s petrels are only found on a handful of islands in the UK, and the species is thought to be declining on both sides of the Atlantic – so it was a real privilege to help with these surveys and get to better understand their nesting habits. As we went on, we became more familiar with their preferred type of rocky crevice – and would find ourselves guessing which rocks may call back to us! 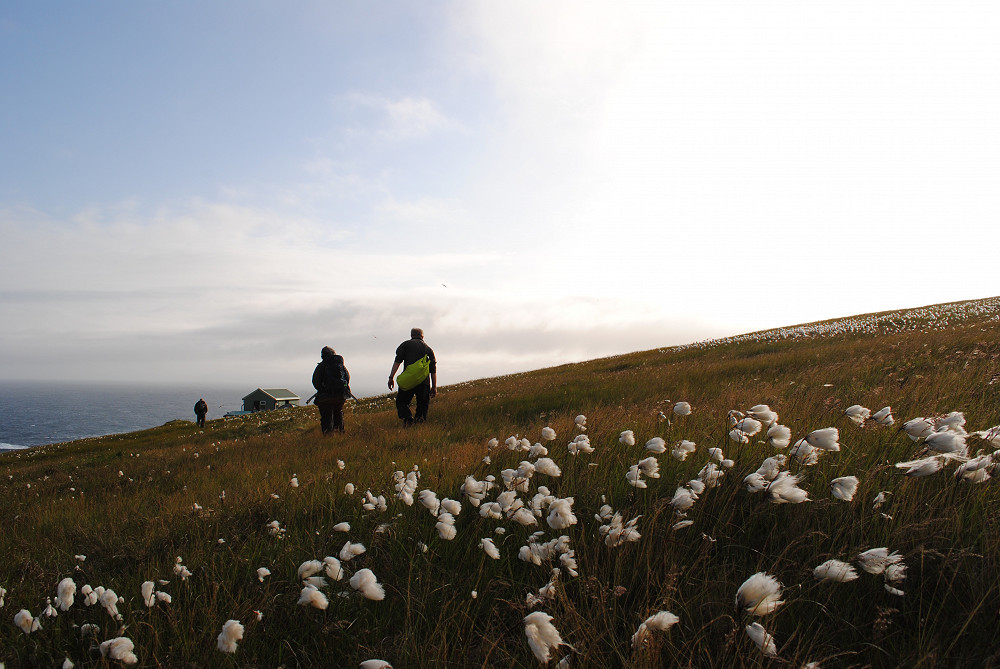 Alister, Carole, Ian, and I heading “home” to the Sea Mammal Research Unit hut after a day with the petrels. Photo: Sarah Lawrence

The petrel surveys weren’t without their challenges – and the weather was certainly not always on our side – with the wind gusting up to force 7 and 8 on our penultimate day. High winds meant that we may not be able to hear petrels replying to us – and the petrels might not be able to hear us in the first place! The high winds also made us wonder when we may be able to leave the island – as the sea was absolutely fierce – and we soon realised how lucky we had been to arrive at the Poll Thothatom landing place which was now swirling with large white waves. 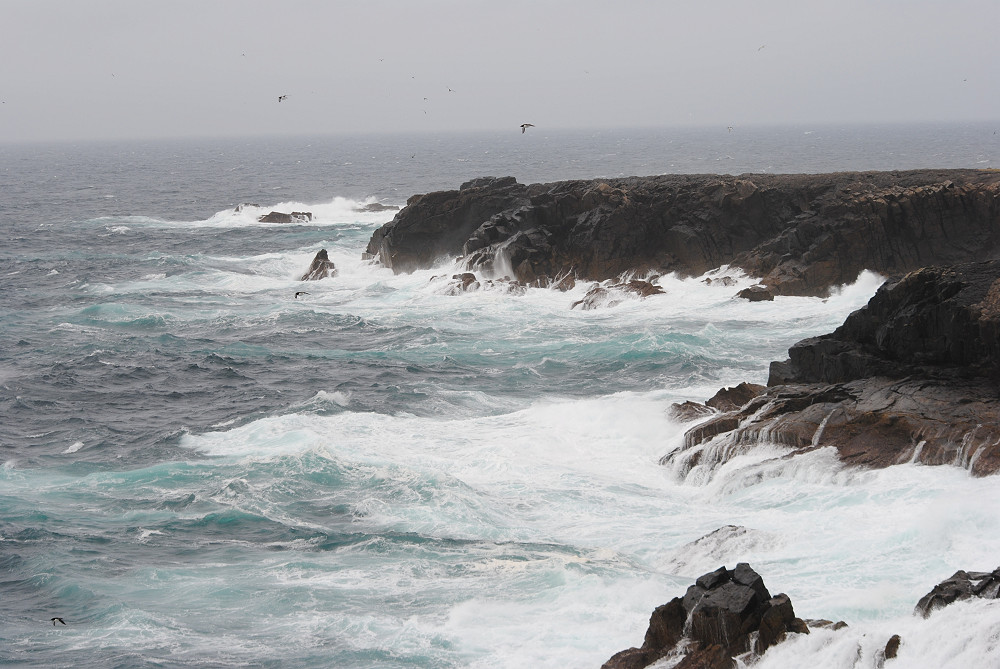 The west side of the Fianuis peninsula showing the full force of the North Atlantic – when will we get back to Leverburgh? Photo: Sarah Lawrence

With the end of our trip in sight, I set about thinking to the future of North Rona’s biosecurity. This island is extremely remote and rarely visited, so we know that making monthly (or even 3-monthly) checks could be difficult here. We plan to return to North Rona in 2022 to complete an annual check as part of the Biosecurity for LIFE project, but we will need help in the long-term from “regular” visitors to the island. For this reason we have left a biosecurity box with a stock of flavoured wax blocks in the SMRU hut, along with a biosecurity protocol and logbook, so that anyone visiting the island can read the instructions and make a quick check of some (or all!) of the surveillance stations and raise the alarm if they find any signs of invasive predators having arrived. We’re also pleased to be working with the Northern Lighthouse Board who can help during maintenance visits to the island.

Are you planning a trip to North Rona? If so then please do get in touch – we can send you the North Rona biosecurity protocol so you can reduce the risk of invasive predators arriving on the island, and you could even drop a replenishment of wax blocks off on our behalf! 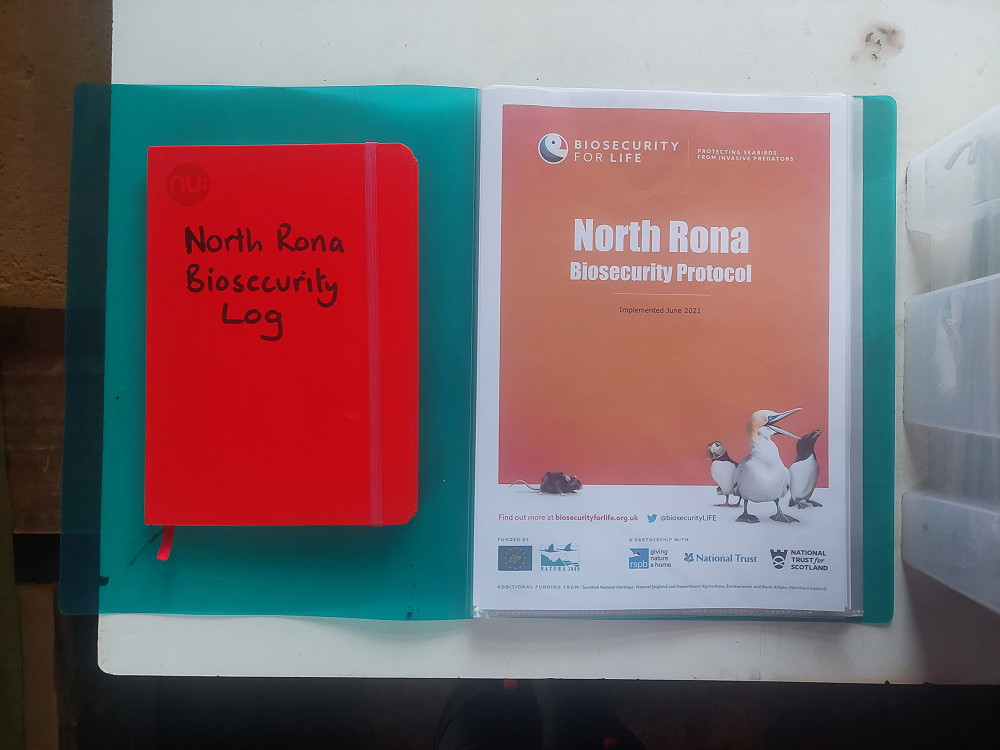 The North Rona Biosecurity Protocol is ready for any passing visitors to help with biosecurity surveillance checks. Photo: Sarah Lawrence